The Pioneer Suit is the player avatar within the game; a medium-sized mechanized power suit used in a variety of roles.

Initially, the player only has access to the basic Gunhead Pioneer; additional Suits and paint jobs can be unlocked by collecting and spending Artifacts, which are found during the course of Campaign and Rogue mode gameplay. Unlocking a new suit costs 2 Artifacts, and unlocking a new paint job costs 1 Artifact. 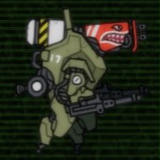 A Gunhead, in Warshark colours.

This dependable military combat exosuit has served with distinction for decades. Though replaced by newer models, the Gunhead is still favoured by mercenary and pirate organizations for its modular components and large catalogue of aftermarket parts.

The Gunhead is the only suit available when starting the game. It's a simple suit with a simple but well-rounded loadout ideal for inexperienced pilots, and can be equally effective in the hands of veterans as well since it has no significant strengths or weaknesses. It may not have the uniqueness of the other suits, but that's not always a bad thing.

In the hands of a good pilot and fitted with a solid loadout, the Gunhead is just as ready to take on the Cryptark as any other suit. 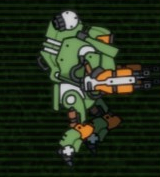 A Rook, in the Oskar paint scheme.

This heavy law enforcement exosuit was developed to assist boarding teams in busting armed smuggling ships. After a streak of ill-fated police raids, captured suits started appearing regularly on the black market. In addition to its sturdy frame, the Rook features a powerful shield generator.

The Rook is a solid and dependable suit, and probably one of the first alternative suits you'll want to unlock; its Kinetic Buffer reduces the amount of knockback and camera shake from incoming attacks, and its Blockade Shield allows a player to hunker down when in trouble (perhaps long enough to recharge the integrated EMP generator) whilst also leaving all four weapon slots free for offensive weapon choices. 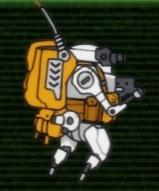 Originally a civilian recreational chassis; this popular suit is easily modified for combat operations and is commonly seen in insurgent forces. While it lacks the weapon hardpoints available on military models, its robust frame is able to carry additional equipment with ease.

Whilst the Jennet has significantly less weapon flexibility than other suits, its integrated Quality Ammo upgrade and additional item slots can make up the difference; the item slots in particular allowing Jennet pilots to pack extra repair kits, utility modules (like mines, turrets, EMP generators, etc.), and passive upgrades to further improve the primary weapon systems.

Image Pending
Invented by disgruntled corporate workers, this aggressive suit type was widely used by rioters for its heavy firepower and mobility in labyrinthine asteroid mines. It carries a volatile tank of compressed incendiary ore, which it is able to dump and ignite as a crudely effective afterburner weapon. 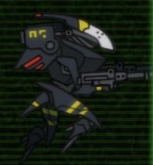 An Intruder, in the Deniable Ops scheme.

This slim infiltration unit has found underground success with warring corporations for its clandestine abilities. Though not armoured for prolonged combat, it is equipped with stealth gadgets and a short ranged teleporter; allowing canny pilots to slip through weak spots in defences.

The fragile Intruder is a skilful, stealthy suit, ideal for those who prefer to sneak around the wrecks instead of engaging enemy forces head on. Its low maximum health means that avoiding combat is generally a high priority, and its toolkit is well-suited to evasive tactics. The Hushpuppy rifle is slow to fire, but accurate, powerful, and doesn't draw enemy attention. Remote Grenades lend a little extra firepower, too.

One of the Intruder's most useful tools is its Translocator beacon, however; the first activation deploys the beacon, and the second teleports you to the beacon's location. By placing a beacon before getting into a risky situation, you can ensure that you have an escape plan if things go south. The ability to pick locked doors and the free cloaking device further aid in the Intruder's ability to freely navigate derelicts by routing around hazards - or simply stealthing straight past ones that might be otherwise unavoidable. 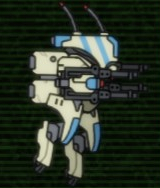 A PDX-40 in Institute colours.

This prototype superiority unit never made it to full production due to safety concerns. Housed inside its blocky armoured casing is an advanced cogitational array that feeds combat information directly to the Pilot via neural plugs. In effect, the reflex time of the Pilot is greatly increased, but prolonged usage can lead to temporal dissociation.

The PDX-40 is a large and chunky powersuit with four arm-mounted weapon slots and a standard utility slot array. What makes it relatively unique is that its Reflex Array can be activated and deactivated at any time; whilst active, time is slowed down (similar to the effect when you're at critical hull strength) and a green bar appears above the PDX, indicating how much time is left before the array automatically turns off. Its default loadout is somewhat average, relying on pilot skill for maximum effect.

Image Pending
A favoured chassis for hyperlane racers and bank jackers, this suit features a short range teleportation projector, allowing it to bore small wormholes through realspace. This weaponized model has replaced much of its hot-rodded power plant for weapon bays, trading speed for firepower.